We all do it – don’t we? The FedEx truck heads down your street, or the brown UPS van, and you watch it drive by, maybe with your arms extended as if beseeching the driver, but he drives on by. Sometimes he acknowledges the comedy with a smile or a wave, but usually he’s in too much of a hurry and drives on by.

I’m not alone in this, right? We all do it? Or is my penchant for street theater surfacing again? 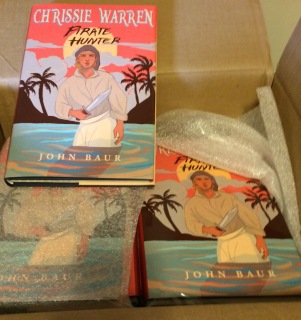 Anyway, the FedEx guy drove down the street yesterday and – he stopped at my house! And dropped off two boxes of books!

It’s the hardcover, a special, one-printing-only version, signed and numbered by yours truly, with special interior illustrations only available in this edition. And, like I said before, people were willing to pay a premium to get it. It was my alternative to trying a Kickstarter campaign. In truth, it was only semi-successful – I didn’t sell as many as I’d hoped, but did sell more than I’d feared. So I made back a little of the overhead for getting the book out.

And I’ve gotta tell you – as exciting as the first box of paperbacks was when it arrived, the hardcovers were so much more. There’s something about a hardcover that is so much more impressive. It’s solid. It’s a book.

It’s also a quick and easy Christmas present for my kids, who no doubt will be thrilled. (Well, it’s “a” gift, not all any of them are getting.)

Now I’ve gotta sit down and start signing them. They have to go out by the end of the week. I’ve bought a special pen for them (which also can go on my taxes as a business expense) and I’ve gotta get to work.